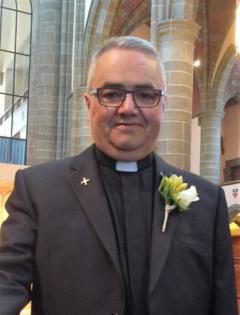 Patrick was born and raised in Nova Scotia, and then later in Fort Nelson, BC. He has always been involved in church. First he was involved as a musician and later on as a liturgist and pastoral associate in the Roman Catholic tradition. At 25 he went to work in Orillia, Ontario in a large Roman Catholic parish where he was liturgy and music director for 19 years. Moving to Toronto, he worked a further three years as a pastoral associate. In 2012, he and his husband moved to Victoria from Ontario and began attending Christ Church Cathedral. Not long after, he began exploring his vocation to ordained ministry. In 2014 he made his profession of faith as an Anglican. In 2015 Patrick was accepted as a postulant to the deaconate here in the diocese of British Columbia. He was ordained deacon May 29, 2016.