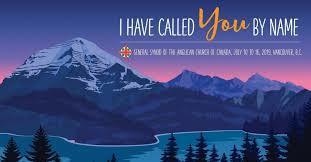 With these words our newly elected and installed Primate of the Anglican Church of Canada, the Most Revd Linda Nicholls, began her closing words of our 2019 General Synod; which had been for all of us a real rollercoaster ride of ups and downs, highs and lows, swerves and loops.

The previous week had been a week full of meetings, conversations, debate, argument, and some powerful conversations. The anticipation of the calling of a new leader of our national church and the fond farewell to Fred Hiltz, our retiring Primate, the exploration of and affirmation of a newly formed Indigenous Church in communion and partnership with, but in no way controlled by, the colonialy founded Anglican Church of Canada, with a newly created Archbishop, Mark MacDonald to serve that church (having previously functioned as National Indigenous Bishop), an affirmation of new relationships with our siblings in the other Abrahimic traditions of Islam and Judaism, a covenant of unity and full communion between the major Lutheran and Anglican churches of North America (Turtle Island), the affirmation of Liturgical changes trialed since 2016's General Synod, the report on and reception of accounts for the Anglican Church of Canada which offered no gloss to the financial difficulties faced by the Church National and Church Local across Canada, an Apology by the Primate to the Anglican Council of Indigenous Peoples for the spiritual harm caused by the Anglican Church given and formally, and emotionally, received. And the discussions, or rather sequence of monologues, over the broadening of the Marriage Canon (Canon XXI) to explicitly include same-gendered marriage rather than only mentioning 'man and woman'. A vote which fell, marginally, at what was its second reading - a reading which was , it seemed, an important step in making a real, visible, positive change in affirming LGBTQ2Siaa+ people as fully embraced and affirmed by the Anglican Church of Canada.

So, yeah, it was a rollercoaster ride of a week. But the low point of the week had been that vote, the behaviour of certain Bishops during and after that vote, and the pain so obviously caused by what was for some 'an issue' but for many a very real rejection not of what they believed, but of who they were. The wails of some of our queer youth delegates at the fall of the vote, blocked by 14 members of the house of Bishops but overwhelmingly affirmed by nearly 75% of the Church cut through the shocked silence in the room and will stay in many of our hearts and minds for a very long time. Even sitting here in a coffee shop writing this post my eyes are filling with tears at the memory of that moment - for most of us, our hearts broke at that moment.

We broke the Church

What the debate over the Marriage Canon amendment and the subsequent vote made painfully clear was that, firstly, previous affirmations of same-gendered relationships, including the 'Word to the Church' voted on just a few hours before (which passed with 85% in favour - the text of which can be found here), were not enough when the message that came from this vote seemed to be that the Church had said 'NO' to queer people being equal.

Secondly, it became abundantly clear that the governance systems of a colonial church, based on an anglo-centric 'Houses of Parliament' model, was and is woefully inadequate for a Church seeking to work in a decolonising way, and seeking to be a place which is no longer bound by the structures of a christendom-based worldview. We are not in that place, the truth is we should never have been in that place (but that's a conversation for another time). If we want to be a Gospel-based church, a church which is agile, responsive, gracious, and open to the wind of the Spirit (blowing wherever she wills as John Chapter 3 verse 8 says) then what we have is not (to quote the oft-repeated phrase on BBC Radio 4 from my past life in England) 'fit for purpose'.

In the wake of the vote, and the restive feeling in the Agenda and Business sessions which followed, the House of Bishops spent many hours sequestered away seeking to offer a calming word to Synod in the light of the one house blocking the obvious desire of the wider church - and by implication (if the theology of Synodical government is taken seriously) the leading of the Spirit.  It was described by one member of Synod as 'the Big Purple Elephant in the room'. The House of Bishops stood (or at least all but a few recalcitrent Bishops did) as the statement was read that acknowledged the hurt caused by the house, the adoption of a 'local option' for equal marriage, and a need to address the structures of Anglican church governance in our church. Most acknowledged the work that had gone into this statement and were grateful for it, many felt it didn't go far enough in addressing what was happening and had happened in the Synod, but it is a beginning in acknowledging and opening the door to profound changes in our Synodical structures - change which is as overdue as it is necessary. One Bishop acknowledged that even the fact that the Bishops had the privilege of sequestering themeselves away privately sent messages of an exclusive leadership separate from the wider people. I think that all but a few Bishops felt that the need for reform, deep reform and not just tweaking, of the structures of governance and leadership in the Anglican church was crystal clear in the wake of the divisions this Synod opened up.

There is so much to process from this Synod - the trauma inflicted not just on the members of the Synod but on the wider church and queer community will take much love and healing to address. We cannot ignore the pain and distress caused by the headlines which read 'Church says no to gay marriage.'  This wasn't the case - in fact there are some very good analyses of the events of Synod by both members and 'veterans' of Synods past which are very clear about the profound and positive changes which took place and will take place as a result of what happened last week - amongst them are posts by Ryan Ramsden, Ron Chaplin, the Ven Alan Perry, and statements by our own Bishop of the Diocese of Islands and Inlets (aka British Columbia) and the delegates from our Diocese.

It was a good Synod

That may seem a strange thing to day - but at the end of the day, this Synod was a good one. It highlighted the need for change which is so badly needed for the church. For open, transparent, accountable governance and humble, responsive leadership. For a new relationship between the colonial and indigenous expressions of church in Canada. For loving and compassionate care for all, especially those excluded by church structures and, to be frank, by bad theology. For the need to be a church founded on Gospel principles, not the inadequate structures of a bygone era. I hope it's already starting to happen - as CTV news reports here!

And as for the fall of the Marriage Canon amendment - the decision by the House of Bishops to allow individual Dioceses (and, potentially, individual Parishes/Priests) to go ahead with offering marriage without the constraint of having to be heterosexual partners is possibly more than the adjustments to the Marriage Canon would have allowed (read some of the reflections on the debate for fuller analysis of this). The Synod also affirmed, overwhelmingly, the fullness of grace in same gendered relationships, and the 'Word to the Church' sought also to give an acceptable 'via Media' to those who still struggle with the definition of marriage (based mainly, I would say, in a 15th century criteria rather than a so-called 'Biblical model' which is pretty much a fallacy).

Alongside the affirmation and support and celebration of the Indigenous Church was a privilege to witness and to celebrate, as well as a recognition that different Indigenous nations and traditions have nuanced approaches to marriage, even as many affirm same-gendered (two spirited in some traditions) relationships and people.  For a lovely summary of this teaching please read Jeffrey Stanley's speech from General Synod transcribed here.

Sep 18
"Making a Life in a Broken System"

What's up with all the shelving in the church???? In Conversations with ... Dr. Christiana Zenner and the Rev. Dr. John Thatamanil