The Christ of St John of the Cross 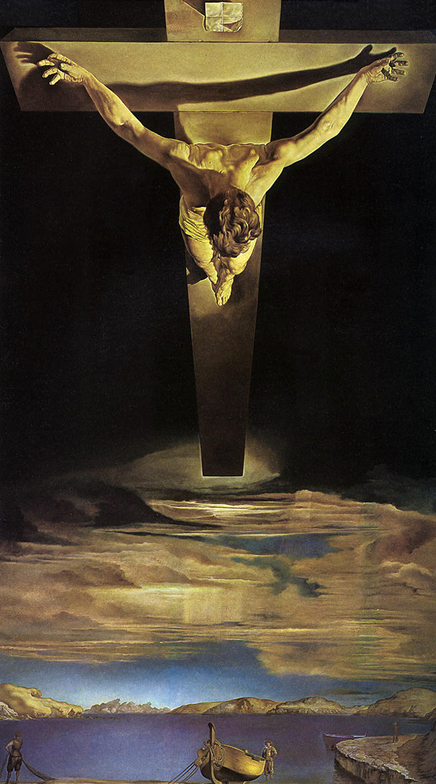 And being found in human form, he humbled himself by becoming obedient to the point of death, even death on a cross.

By far the most popular of all Dali’s religious works is without a doubt his ‘Christ of Saint John of the Cross’, whose figure dominates the Bay of Port Lligat. The painting was inspired by a drawing, preserved in the Convent of the Incarnation in Avila, Spain, and done by Saint John of the Cross himself after he had seen this vision of Christ during an ecstasy. The people beside the boat are derived from a picture by Le Nain and from a drawing by Velazquex for The Surrender of Breda.

At the bottom of his studies for the Christ, Dali wrote:”In the first place, in 19150, I had a ‘cosmic dream’ in which I saw this image in color and and which in my dream represented the ‘nucleus of the atom’. This nucleus later took on a metaphysical sense; I considered in ‘the very unity of the universe’, the Christ! In the second place, when, thanks to the instructions of Father Bruno, a Carmelite, I saw the Christ drawn by Saint John of the Cross, I worked out geometrically a triangle and a circle, which aesthetically summarized all my previous experiments, and I inscribed my Christ in this triangle.”

This work was regarded as banal by an important art critic when it was first exhibited in London. Nevertheless, several years later, it was slashed by a fanatic while it was hanging in Glasgow Museum, proof of its astonishing effect on people.