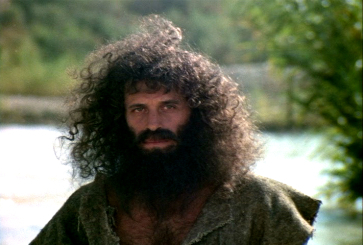 Today in churches around the world the readings will remind people of John the Baptist (also known as John the Baptizer, in case there was any confusion over whether he was a member of the Baptist denomination (he wasn't)). John is a fascinating character, but one whose importance we miss if we see him only as a hairy prophet with an interesting diet, cousin of Jesus, and a minor character in the Advent story.

John indeed declared the immanence of the chosen one of God (called 'Messiah" or 'anointed one' in the Hebrew tradition, 'Christ' is the Greek version of a word which means that). He pointed, say the Gospel storie, to Jesus ben Joseph as the one who fulfilled the expectation of the chosen one appearing.  But John had a message of his own, one which is is as relevant today as it was then. The message was 'you need to change'. There's much more to it than that, of course, and John was strong in his condemnation of hypocrisy and corruption amongst the authorities (particularly religious authorities) - he spoke truth to power, even at the risk of his own safety, and that was what caused his untimely death through beheading. But that's a story for another time.

The key to John's message is one which finds its fulfilment in the teaching of Jesus - change is possible, and transformation is at the heart of the work of God in our lives.  As a symbol of this transformative hope John invited people to be immersed in water - baptism, a ritual still used in Christianity with the same meaning, linked with the death (going under the water) and the rising (coming out again) of Jesus.  In the Greek of the Christian Scriptures this transformation is called metanoia - meaning literally 'after-thought' - a change of mind, heart, life. It means more than that, though, it is used as a synonym for repentance - a turning towards that which is good and lifegiving and turning away from that which is unhealthy and destructive.

In the Christian understanding of metanoia this transformation is achieved by more than good intention, or by 'pulling oneself up by the bootstraps', it is a change of life, of all we are, undertaken in partnership with the Divine. It is a gift offered that we might become all we are able to be, discovering the fullness of our humanity and our divine potential. We move towards healing, wholeness, life, and the fullness of love through this process of metanoia - may we all hear again the call of John and be all we are meant to be.

St. John, strong Baptist,
Angel before the face of the Messiah
Desert-dweller, knowing the solitudes that lie
Beyond anxiety and doubt,
Eagle whose flight is higher than our atmosphere
Of hesitation and surmise,
You are the first Cistercian and the greatest Trappist:
Never abandon us, your few but faithful children,
For we remember your amazing life,
Where you laid down for us the form and pattern of
Our love for Christ,
Being so close to Him you were His twin.
Oh buy us, by your intercession, in your mighty heaven,
Not your great name, St. John, or ministry,
But oh, your solitude and death:
And most of all, gain us your great command of graces,
Making our poor hands also fountains full of life and wonder
Spending, in endless rivers, to the universe,
Christ, in secret, and His Father, and His sanctifying Spirit.

John said to the crowds that came out to be baptized by him, ‘You brood of vipers! Who warned you to flee from the wrath to come? Bear fruits worthy of repentance. Do not begin to say to yourselves, “We have Abraham as our ancestor”; for I tell you, God is able from these stones to raise up children to Abraham. Even now the axe is lying at the root of the trees; every tree therefore that does not bear good fruit is cut down and thrown into the fire.’

As the people were filled with expectation, and all were questioning in their hearts concerning John, whether he might be the Messiah, John answered all of them by saying, ‘I baptize you with water; but one who is more powerful than I is coming; I am not worthy to untie the thong of his sandals. He will baptize you with the Holy Spirit and fire. His winnowing-fork is in his hand, to clear his threshing-floor and to gather the wheat into his granary; but the chaff he will burn with unquenchable fire.’

So, with many other exhortations, he proclaimed the good news to the people