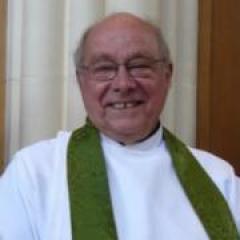 The Rev. Dr. Larry Scyner is well known to many of us. He was the priest-in-charge before Alastair McCollum became our current rector. He was an honorary assistant at St. John’s for many years before that and is an honorary again now. He ministered as a hospital chaplain in Montreal and  as the director of the Pacific Centre for the Family in Victoria. He led parishes through important transitions at the Church of the Advent and at St. Mary the Virgin, Metchosin.

After Montreal, he held senior management positions in several family counselling agencies and in the Social Work Department of Health Sciences Centre, Winnipeg, before working in Victoria as Executive Director of Pacific Centre Family Services Association. He holds theological degrees from Cambridge and McGill, and Social Work degrees from McGill. He holds a Ph.D. in Social Administration, Mental Health and Social Work from Bristol University, England.