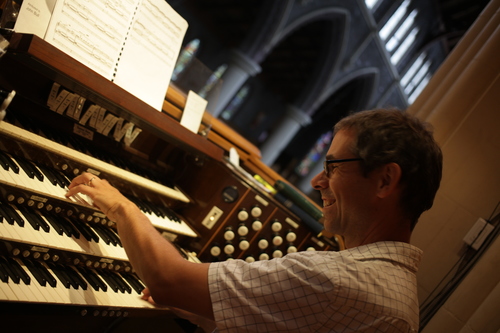 David StratkauskasDavid Stratkauskas is a native of Vancouver, where he completed his MA in Music Theory at the University of British Columbia, working under the notable theorist, Dr William Benjamin. During and after his university studies, he was active as an organist and choir director, collaborative pianist and accompanist (working with such choirs as the Surrey Children’s Choir and the Vancouver Bach Children’s Choir), a jazz pianist, and a conductor of new music, appearing in festivals such as Sonic Boom. In 2003, inspired by his particular love for organ and choral music, David moved to London, where he was organist at St Michael's Battersea and St Mary Stoke Newington. Several of his choristers from St Michael’s went on to organ and choral scholarships at Cambridge colleges.  In London he also worked as a choral conductor, jazz pianist, and teacher.

David returned to Canada in 2010 to take the position of Organist at the Church of Saint John the Divine, Victoria, where he has helped build a vibrant music programme with several choirs and a thriving Choral and Organ Scholarship programme, performing works from the sacred choral canon, but also championing new music, such as works by Michael Finnissy, Jonathan Harvey, and Kimberley Farris-Manning.  David has directed the St John's Chamber Singers and the Victoria Baroque Players in numerous performances of great Baroque works, including several of Bach's cantatas and motets, Handel's Dixit Dominus, Durufle's Requiem, and Bach's John Passion. He has also worked with the Victoria Children's Choir since 2011, including directing the Concert Choir in 2014-15, with whom he toured Holland, marking the 70th anniversary of the liberation of that country from Nazi occupation.

As an organ recitalist, he has played concerts in Vancouver, London (UK), and Victoria, including on the Summer Organ Series at Christ Church Cathedral, which featured pieces by Canadian composers Tony Genge and Jocelyn Morlock (the latter, Premonition, commissioned in 2012 for David by Hugh Davidson). David is married to Soile Stratkauskas, a baroque flutist and the Artistic Director and founder of the Victoria Baroque.