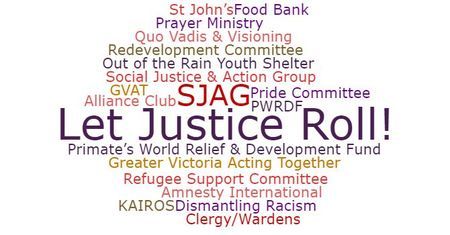 Every six weeks or so, we are reminded to sign Amnesty International letters at Coffee Hour. About 20 - 25 parishioners faithfully do just that. These letters are signed on behalf of "a group of faith-based citizens."

This has been the practice at Saint John's for several years. There may be some newer parishioners who are not aware of our connection to Amnesty International. Amnesty International was founded in 1961 by a British lawyer who launched an appeal to obtain amnesty for prisoners of conscience all over the world. In 1963, an international secretariat was established and the work over the next many years expanded to include campaigns against torture, capital punishment and other instances of gross violation of human rights globally.

For many years, Tom Lane established a monthly routine of providing the opportunity for Saint John's parishioners to support this important work through signing their names to letters of hope. We continue this pattern today. At present, I compose the letters guided by information regularly received from Amnesty International.

As well as letters to foreign governments, many of our letters are written to our own Prime Minister and the Minister of Foreign Affairs, encouraging them to respond to appeals from global brothers and sisters who, in spite of their innocence, are charged and imprisoned - often for simply speaking out for social justice in their own countries.

Amnesty International has a world-wide reputation for "doing its homework" on the background information about these issues. It is transparent and apolitical in its motives. The work seeks to liberate those who cannot speak for themselves - surely the work of our Church's longing for God's justice.

Amnesty International is a global movement of more than 7 million people in over 150 nations who campaign to end abuses of human rights. AI works for a world where human rights are enjoyed by all!

Barbara Jenks is a member of St. John’s and a seasoned social justice activist.

International Day to end Homophobia, Transphobia, and Biphobia Thank you from the Victoria-Taiama Partnership!