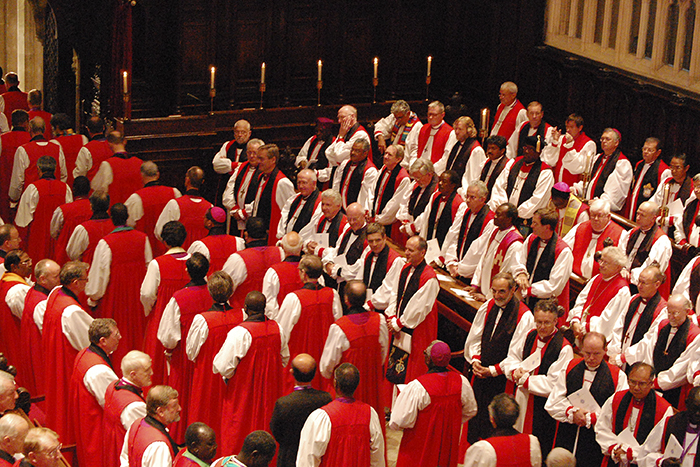 Those of you who follow me or are connected with me on Social Media will have seen me post on Facebook this morning a letter from Sandy Toksvig, a British based comedian, writer, and TV/Radio personality, an open letter to the Archbishop of Canterbury - here's a copy of it:

FAO The Archbishop of Canterbury
Dear Justin
I know we've never met and I probably should call you "Your Grace' or "Your Eminence' or something but I wish we were friends. If we were I'd call you and say "Justin, Justin, what are you doing?" We'd have a chat and maybe I could
persuade you that you have made a horrible mistake. It's what friends do for each other.

So, you and your other religious pals got together at the Lambeth Conference and the main take away seems to be that gay sex is a sin. It was a sin in 1998 and you just wanted to make clear in 2022 that no one in your finely frocked gang has moved on from that. Seriously, with the state the world is in, that is what you wanted to focus on? You didn't have other more pressing matters like, I don't know, war or poverty?

Did you know that a survey in 2021 by Just Like Us, an LGBTQ+ young people's charity, found that young LGBTQ+ people are twice as likely to contemplate suicide and three times more likely to self-harm as their non-LGBTQ+ peers? Do you know why? For many it's because they don't feel loved and love, Justin, is supposed to be at the core of what you do. It's like top of the job description. Apparently you feel you have balanced out this shocking statement of exclusion by saying you won't punish churches who conduct same sex marriages. What would that punishment be?  Does the Church of England have a naughty step where loving priests sit before allowed back at the bigot's table? This is a serious matter. The lives of LGBTQ+ people are at stake here. I have had several credible death threats over the years sometimes requiring the very kind assistance of the police hate crime squad. Each and every one of those threats has come from an evangelical Christian. Inevitably they have wanted to kill me on God's behalf because although he may be omnipotent apparently he's also very busy. Why just raising this matter with you is probably a bad idea for my  health. I'll cope but what about my brothers and sisters who won't?

You talk about questioning biblical teaching "unthinkable', There are seven texts in the Bible which are often pointed to as proof that God hates a homosexual but everyone who has ever studied the matter knows that the 'proof' lies only in extremely fallible interpretation. None of it is clear cut. You are a smart guy and you know it would be perfectly  possible to see the same words in a positive light if you were so minded. Sodom and Gomorrah is not about condemning loving same sex couples but about sexual violence and the importance of kindness to strangers. How ironic. When same sex marriage was being debated I heard an Anglican bishop interviewed on Radio 4. "Gay people," he declared, "have enough equality." Enough equality? It's not something that comes in slices. You either have it or you don't.

Oh Justin, how can you be so stuck? Are you saying that the Bible teaches us that none of us can ever learn from
experience? That we can never grow and gain a deeper understanding of human behaviour than we had 2,000 years ago when you could still feed a crowd with two loaves and a handful of fish? Jesus doesn't mention sexuality at all. It clearly wasn't a big deal for him. The only time I think he had anything like a conference was when he gathered 5,000 people for the Sermon on the Mount. That was when he talked about good trees bearing good fruit and bad trees bearing bad fruit. That's the sort of message that would be great from you. Really simple. Just be a good person. That's it. Jesus never even mentioned whether the tree was bent or not.

As chance would have it, this Saturday my wife of sixteen years and I, the heathens that we are, will be attending our neighbourhood C of E church. We have been too hurt over the years to have any faith left but I am hosting a concert to raise money for local Ukrainian refugees. I am happy to  do it but I will not feel welcome knowing the long shadow my sin casts.

I am a humanist. I continue to believe in the fundamental goodness of people. Despite my lack of religion I have often found solace in churches. We all need calm spaces to gather our thoughts but I am done. After the concert I shall leave the church and never set foot in an Anglican building again. I'll come back when you decide to welcome  all of 'God's children' on equal footing.

Call me, Justin. Let's have coffee. Let me talk you round. You never know, I might even forgive you.

It is a powerful piece, and I shared it with the same sense of outrage that is clearly there - as someone who has ministered in the Anglican Church for 28 years, 26 of those ordained, and been a part of the Anglican Church since I was 18 I have been heartbroken by the institutional homophobia that has been prevalent in the Church of England and the wider Anglican Communion. As someone who has ministered alongside profoundly dedicated and deeply spiritual LGBTQ2SII++ Clergy and Laity I have been frustrated at the way in which many of them have been treated by 'the Institution', whilst heartened by progress made in inclusion and affirmation on the way, though it is still nothing like enough.

But soon after posting a colleague in the Diocese of New Westminster, a Deacon of the Anglican Church, shared with me a post by Kelvin Holdsworth, Provost of St Mary's Cathedral, Glasgow and Advocate for the LGBTQ2SII++  community where Sandy's letter was 'fact checked' and, frankly, many, no most, of the claims made about what the Archbishop of Canterbury had and hadn't said and about the focus of the Lambeth Conference were simply false. I won't copy and paste the whole of the blog here, but it is worth going to the 'What's In Kelvin's Head?' blog and the post here: Fact Checking Sandy Toksvig.

So I removed the original post and resolved to write a blog which said why. And here I am.

It's important to note, and easier to put this here than try and create a comment thread on Social Media, that Sandy's outrage has good foundation - indeed, the Anglican Church, and most other traditions of the Church, have been guilty of institutional homophobia, and worse, in some places have condemned people for their sexuality or gender identity, and colluded with some states in the persecution and even murder of Queer persons. The Issues in Human Sexuality Report and the calls from the 1998 Lambeth Conference that came from that does indeed affirm that the only valid marriage is 'between one man and one woman' and excludes the beautiful diversity, and I would say God-given diversity, of sexual expressions of human love. Furthermore, it's true that in many places openly Queer Clergy are not permitted to marry or have their license to minister removed if they do, and it is also true that Queer Clergy in the majority of the Anglican Communion cannot be 'out' or if they can must remain celibate even if in a committed relationship.

But, and I fell into this trap, it is easy to go to the place of outrage without actually checking if everything is true. Without actually reading the words that were said rather than someone's impression of them. Sandy, and other people's views seem to be informed more by the media, or social media, reports and reflections than the substance of what was said or done.

We too easily fall into binaries of 'us and them' or outrage at shares on Social Media without delving into what is behind them. I thought I was Social Media savvy, and I think on the whole I don't tend to share without thinking, but Sandy's open letter touched a nerve and I shared it quickly without the cool reflection that someone like Kelvin took time to do.

But also there is a lesson here that what is expressed by Sandy Toksvig, and others is a perception that is held by the society outside the Church - that we spend more time talking and being censorious about sex than we do about addressing the Climate emergency, the wars which are taking place throughout the world, the pandemic, or poverty. For those of us 'on the inside' we know that's not true, and many of us engage every day - in our prayers, discussions, and the actions we take - with these broken parts of God's world. But, as a wise Churchwarden said to me a few years back 'Perception becomes reality' - we must listen to the voices that reflect back what people think of the Church, how people talk of the Church, and if we want this to change we must be visible agents of the love of Christ that inspires us and compels us to transform this world for the better.