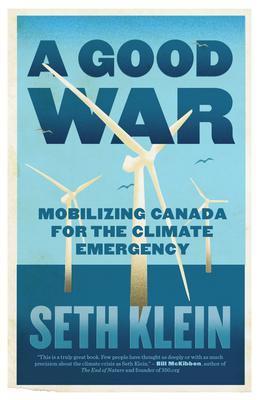 Seth Klein, founding B.C. director of the Canadian Centre for Policy Alternatives (CCPA), has written a startling book that tries to galvanize Canadian society to fight climate change.  He does this by drawing parallels to the Canadian response to World War II.

Klein refers to the Green New Deal (GND), a plan developed in the United States in 2019 in  recognition of the existential crisis that climate change poses.  The plan assumes that strategies for ecological change are closely linked to strategies for social change to heal inequalities in our society. The plan espouses a form of Keynesian economics in making this link.   Variations of the GND have been developed and promoted by many activist organizations in Canada.  Klein believes that the problem of fighting climate change is not a technical one or one of policy.  We know what has to be done.  The problem, he says, is one of political will.  Our political leaders feel they can only go so far because the public would rebel, but Klein cites many polls showing the majority of Canadians to be very concerned about addressing climate change.

The book’s description of Canada’s response to the War is gripping.  As a country of 11.5 million people, we mobilized a million people into the armed forces and played a significant role in major battles.  He suggests that we could similarly help employees in the oil and gas industries to transition to jobs in green energy.  Indeed the scale of such a programme would be relatively smaller than the mobilization in WWII.  Klein also describes how we came out of the War with major social programs like Family Allowance, Old Age Security, and Medicare which are hallmarks of our society today.

The author adamantly refutes the common notion that Canada, having a small population, is not a significant contributor to global warming.  Canadians in fact have the highest per capita green house gas (GHG)  emissions  in the world (probably due to our northern location and the distances we travel in our huge country).  And we are major exporters of fossil fuels.  The GHG emissions from those exports are not counted against us even though we profit hugely from them.  Northern Canada in the Arctic is warming at three times the global rate.  Southern Canada is warming at twice the global rate.

Chapter 8 may be of particular interest as Klein outlines in fascinating detail how we united our country and paid for the eight-fold increase in annual federal government spending during WWII.  He then describes how we could finance the war on climate change.  Many measures ultimately would make taxation fairer, compelling the ultra-rich (who are also the highest producers of GHG) to pay a fair share.  He notes that royalties charged to fossil fuel companies in Alberta today are very much lower than in the days of Premier Lougheed.

Klein also gives warnings about what not to do.  He does not advocate using the War Measures Act as in WWII because it denied civil rights too much.  He advocates a new, more nuanced Emergency Measures Act.  The book gives detailed plans for mobilizing for war on climate change.  It recognizes the vital role of Indigenous people. It asserts the necessity of humane policy toward refugees and immigrants (unlike Canada’s poor response to refugees fleeing the Nazis).  Klein points out the dangerous rise of the far right in our time, paralleling the rise of fascism before WWII.

This book is important reading for us all. Greta Thunberg says that she doesn’t want our hopefulness.  She wants us to panic.  Then at last we might act.

Sara Chu is a member of the Social Justice and Action Group (SJAG) at St. John's and a frequent contributor to Let Justice Roll.

A Good War: Mobilizing Canada for the Climate Emergency is published by ECW Press (2020).