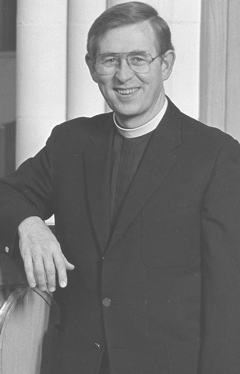 Archdeacon MacRae was born in Prince Albert, Saskatchewan to a family with rural roots in the province. Bob, as he was known to many, had a wide variety of life experiences in his work as a young man and this helped him later to develop dynamic ministry.

Upon completing high school Bob attended the University of Saskatchewan for two years. In the summer he did officer training for the Navy through ROTC at Royal Roads. This was his introduction to British Columbia, and it led him to complete a Bachelor of Arts at UBC in 1953. He intended to study medicine. For a year Bob worked as a social worker in Yorkton, Saskatchewan. Bob was only 22 years old but looked even younger—about 15. One of his tasks was to assess the suitability of prospective adoptive parents in an era when there were many babies available. He often transported babies in his car as part of the job. He also had to investigate homes where there were difficulties and the safety of the children was in question. He reflected on how poorly prepared he was to fulfill these responsibilities. While in Yorkton, Bob attended the local Anglican church and began to feel torn between wanting to be a doctor and feeling a call to ministry.

In the summers of 1955-56, while a student at the College of Emmanuel and St Chad in Saskatoon, Bob had a student placement at St. John the Divine, Quesnel, BC. He and another theology student presented Vacation Bible Schools in Quesnel and in surrounding small communities. He also looked after two churches, one in Wells (60 miles east of Quesnel) and one in Barkerville 5 miles from Wells. Bob had no car. He travelled to Wells on the "Barkerville Stage", an old van that served as a bus, and walked between Wells and Barkerville. On his first trip, a drunken fellow passenger threatened to slash Bob's neck with a broken bottle. He managed to placate his attacker but on arrival in Wells, he was immediately called to attend a suicide at the local mine. It was a shocking introduction to what being a priest could entail. In 1958, Bob was ordained Deacon and in 1959 he was ordained priest by the Bishop of the Caribou.

While a theology student, Bob met Helen Larmonth, later known as Helen Hughes. In Quesnel, he also was befriended by Roly and Vi Wilkins who were later to be long time members of St. John's Victoria and caretakers in St. John's Court.

Bob's first parish after ordination was Ashcroft in the Diocese of Cariboo. The parish had churches in Ashcroft and Clinton and a rural circuit including Cache Creek and about twenty small geographic points. Two years later he returned to UBC, this time to study for a Master of Social Work. He then went to Kamloops to be vicar of a two-point parish: Westsyde and Savona (45 minutes away). In the 21/2 years he was there, Bob established a new Church of Cleopas in Westsyde (so named because the story of the road to Emmaus was his favourite) and helped St. Hilda's Savona begin building a new church. Bob was always very energetic. He had an ability to inspire energy in people around him and no shortage of innovative ideas. Also while in the Kamloops area, he helped establish a hostel for men and laid the framework for the Marion Hilliard Home For Unmarried Mothers. Roly and Vi Wilkins were the first house parents there.

Savona was also the place where Bob met his wife Susan. She grew up on a ranch just outside Savona and graduated in Nursing at UBC in June of 1966 and they wed in July of that year.

In the 1960s and '70s, the Anglican Church had a bigger national staff and was very involved in social policy. In 1966, Bob went to work at the national office (Church House) in Toronto. Bob joined the staff of the Council for Social Service (CSS) and was responsible for several portfolios including prison ministry, family life, and ministry to the armed forces. He helped present briefs to the Federal Government on social policy issues like abortion, family planning, death and dying. Bob was one of the staff people that presented the Hendry Report: Toward An Assessment of the Work of the Anglican Church of Canada with Canada's Native People to General Synod in 1969. Our church was realizing it was complicit in a destructive chapter in Canadian history. Bob and Susan soon started a family and their four daughters, Julia, Bridget, Phoebe, and Caitlin were all born in Toronto. The family attended St. Timothy's in North Toronto and they helped to establish a more casual family service, which was a new idea in the Anglican church.

In the latter half of their 11 years in Toronto, Bob was secretary of PWRF, which later became PWRDF, when the church realized that Development was an important part of helping struggling Third World countries. Bob traveled internationally for a month each year, plus he made many short trips within Canada as well. He went to Nigeria, Gambia, Uganda, Kenya, India and Sri Lanka. Bob also attended meetings in Geneva for the World Council of Churches. This work reinforced Bob's strong belief that changes in social policy were crucial to helping the poor and disadvantaged in any society.

Susan became involved with La Leche League, helping mothers breast feed and it was through her that Bob became aware of the evil doings of the Nestle company. Nestle was using aggressive sales tactics to promote infant formula to Third World mothers. The World Health Organization condemned Nestle's actions. In 1977, Bob left Church House and became Rector of St. John the Divine, Victoria. In the late 1970s, he was instrumental in establishing INFACT Canada which did battle with corporate interests on the ethics of promoting breast milk substitutes.

Even though Bob had only a few years of parish experience, St. John's and Bob were a good fit as the community was open and caring. Reading the church leaflets from 1977 to 1997, one notes a tremendous number of outreach activities at St. John's. We supported local causes such as the Rural Wedge Farm on Balmoral Street when an arsonist struck them. We gave space to Rick Sandberg's ministry to street youth, and to the Single Parent's Resource Centre. One of our members helped found Threshold Housing and we have supported it ever since. We had a prison ministry by parishioners. PFLAG had its beginning in St John's lounge. We had Neighbourhood Networks and supported the Greater Victoria Council of Churches. We hosted Welfare Wednesday in 1994. We helped fund a new van for the Upper Room food service and our Parish Food Box became the EFS (Emergency Food Service) in 1996. We started the Alliance Club Cooking. And every year, the Lenten Noon Forum, with speakers on many important topics, attracted many non-church members to our doors.

We supported international causes through Ten Days for World Development, Anglicans in Mission, and Primate's World Relief and Development Fund. In 1983, we helped host the World Council of Churches' General Assembly. Our Parish Partnership Program (PPP) helped us learn about the church in Brazil and in 1992 a group of parishioners travelled there. On numerous Sundays, we had guest preachers from places like Brazil, Nicaragua, Nigeria, Ecuador, El Salvador, Uruguay, Peru, Burma, and Mozambique. We had visitors from China's State Education Commission. We supported VIDEA (Victoria International Development Education Association). We went on the annual Peace Walk. We supported Physicians for The Prevention of Nuclear War, Project Ploughshares, and Tools for Peace.

We made interfaith connections with Congregation Emmanuel and had Seder suppers. In 1988 we celebrated the 1,000th anniversary of the Baptism of Kiev (Russian Orthodox Church) and in 1994 we even had a course about the Sikh faith.

We were active in First Nations issues. Project North began in the early 1980s and in our Parish Partnership Program we partnered with the Diocese of Caledonia. Parishioners visited Haida Gwaii in 1992. We had reciprocal visits with Haida Gwaii and the Nass Valley. Climate change was highlighted many times in messages in our leaflets. One leaflet in 1990 had "Environmental Tips". Bob gave sermons in support of the Clayoquot Sound protests in 1993 and a group of church people from Victoria went to join the protest, but the forestry company decided not to come to work that day.

Bob was an incredible leader in all these endeavours. He wrote a "Letter From the Rector" in most of the leaflets and posted numerous notices of educational workshops and events. He and Susan and the whole family were very involved in the arts, especially music so we enjoyed a rich program of concerts and dramatic presentations. We helped the Youth Orchestra get started by providing rehearsal and, eventually, office space.

Bob was made an Archdeacon in 1983. In the 1990s he chaired the Long Range Planning Committee for General Synod. Bob had a gift of being able to see important trends and connections. He was a joyful person who loved his job and loved people. He bubbled over with ideas for involving his parish in the larger community, inspiring the congregation to "Be the Church in the World." In 1997, Bob retired. In 2015, he died on August 1 after a short illness. It was Bob MacRae who put St. John's firmly on the path of advocacy for social justice and for that we are forever grateful.

This article on Bob MacRae was written for LJR by SJAG member Sara Chu. We are grateful for the input for this profile provided by Bob's wife Susan MacRae.