Music during the Time of COVID-19 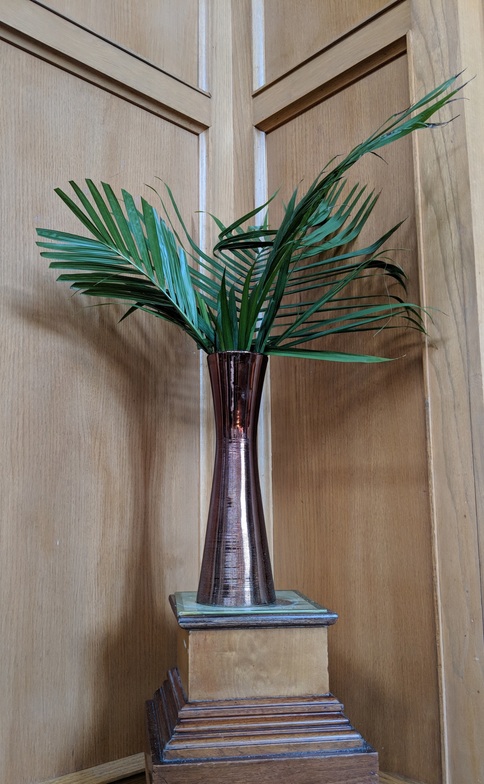 The contrast is stark: between glory, optimism, triumph; and disappointment, defeat, and a most horrible death. The trajectory today is the downward one; the unspeakable depths of Good Friday lie ahead; but there is the certainty of Easter to come, a reversal of this trajectory, dim and distant though it may seem.

The liturgy of the Palms typically starts with the antiphon, Hosanna filio David, the translation of which is:
Hosanna to the son of David:
Blessed is he who comes in the name of the Lord.
O King of Israel: Hosanna in the highest.

This year, our Community Choir would have sung this in the Gregorian setting - here's the Choeur Gregorien of Paris:

As we move in procession from the Liturgy of the Palms, every year we sing the ancient hymn 'All Glory, Laud and Honour', the original version of which was written by Theodulf of Orléans in 820, based on Matthew 21:1–11. Here's the version out of the New English Hymnal:

Most Sundays we sing a hymn at the Gradual, which precedes the Gospel of the day, in this case the reading of the Passion of the Lord. On Palm Sunday, invariably, we sing a choral setting of the appointed text for the Gradual, 'Christus factus est', the text of which translates:

Christ became obedient for us unto death,
even to the death, death on the cross.
Therefore God exalted Him and gave Him a name
which is above all names.

In this text is all the duality of Holy Week, and indeed, the whole of the Christian Myth: out of death, life; out of nothing, everything; that defeat, victory; life is both short and vain, yet transcendent and eternal. Felice Anerio's setting of this text expresses this - as Herbert O'Driscoll observed in a Palm Sunday sermon at St John's the better part of a decade ago - in the perfection of a couple minutes of polyphony; you can hear the shift in the music at 'Therefore God exalted him...':

The great hymns that are appropriate on this day include 'My song is love unknown', 'When I survey the wondrous cross', and 'Ride on, ride on in majesty'. But this year, we likely would have finished with another ancient him, translated by J. M. Neale, 'The royal banners forward go', which looks unabashedly forward to the week ahead and the sacrifice of Good Friday. Sacrifice is of course an uncomfortable, even unwelcome, topic in theological circles, but will no doubt be more and more on our minds in the weeks ahead.

The royal banners forward go;
The cross shows forth in mystic glow,
Where he in flesh, our flesh who made,
Our sentence bore, our ransom paid.

Where deep for us the spear was dyed,
Life's torrent rushing from His side,
To wash us in that precious flood
Where mingled water flowed, and blood.

Fulfilled is all that David told
In true prophetic song of old.
That universal Lord is he,
Who reigns and triumphs from the tree.

O Tree of beauty, Tree of light,
O Tree with royal purple dight,
Elect on whose triumphal breast
Those holy limbs should find their rest!

On whose dear arms, so widely flung,
The weight of this world's ransom hung,
The price of humankind to pay
And spoil the spoiler of his prey.

O Cross, our one reliance, hail!
So may thy power with us prevail
To give new virtue to the saint,
And pardon to the penitent.

To Thee, eternal Three in One,
Let homage meet by all be done;
Whom by the cross Thou dost restore,
Preserve and govern evermore.   Amen.