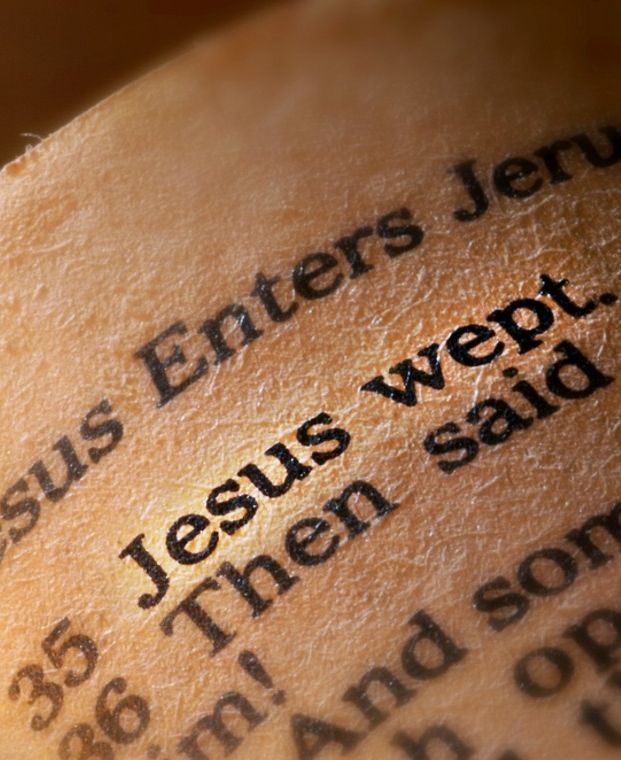 When Mary came where Jesus was and saw him, she knelt at his feet and said to him, ‘Lord, if you had been here, my brother would not have died.’ When Jesus saw her weeping, and the Jews who came with her also weeping, he was greatly disturbed in spirit and deeply moved. He said, ‘Where have you laid him?’ They said to him, ‘Lord, come and see.’ Jesus began to weep. So the Jews said, ‘See how he loved him!’ But some of them said, ‘Could not he who opened the eyes of the blind man have kept this man from dying?’

Then Jesus, again greatly disturbed, came to the tomb. It was a cave, and a stone was lying against it. Jesus said, ‘Take away the stone.’ Martha, the sister of the dead man, said to him, ‘Lord, already there is a stench because he has been dead for four days.’ Jesus said to her, ‘Did I not tell you that if you believed, you would see the glory of God?’ So they took away the stone. And Jesus looked upwards and said, ‘Father, I thank you for having heard me. I knew that you always hear me, but I have said this for the sake of the crowd standing here, so that they may believe that you sent me.’ When he had said this, he cried with a loud voice, ‘Lazarus, come out!’ The dead man came out, his hands and feet bound with strips of cloth, and his face wrapped in a cloth. Jesus said to them, ‘Unbind him, and let him go.’

Jesus wept, or in this translation, 'Jesus began to weep.' - the shortest verse in Scripture. Jesus grieved over his friend Lazarus. The authors of John wanted their readers to know this, to stress Jesus humanity and depth of feeling, and to show us how deeply love can affect us.

It may seem odd to have Jesus weep in this passage, particularly as the story then proceeds to Lazarus being raised from the dead, but at the same time it is a reminder that no matter what we believe, or what we hope may happen, no matter how strong our faith, we will still be profoundly affected by the love we hold for others - and when something happens to them we will grieve.

Love opens us up to feeling deeply. It is not easy to love others, or to let others into our hearts. Love makes us vulnerable, but it also gives us the strength to be open to others, and the strength and courage to face whatever happens.

Holy God, Creator of Life,
you call us out of our dark places,
offering us the grace of new life.
When we see nothing but hopelessness,
you surprise us with the breath of your spirit.

Call us out of our complacency and routines,
set us free from our self-imposed bonds,
and fill us with your spirit of life, compassion, and peace,
In the name of Jesus, your anointed one, we pray. Amen.

written by Nancy Johnson, and posted on Wonderings through life and other such nonsense. shared by re:Worship