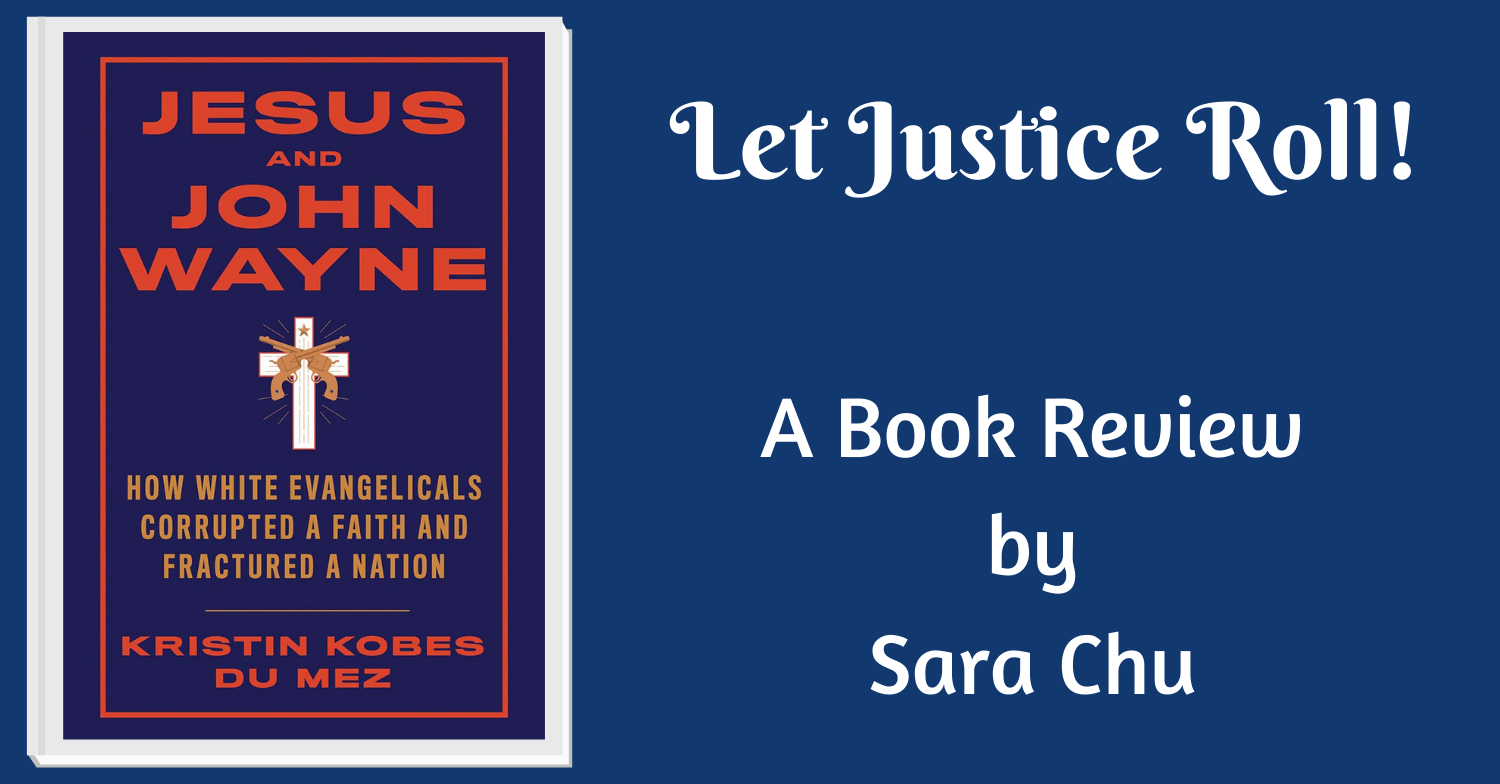 Jesus and John Wayne: How White Evangelicals Corrupted a Faith and Fractured a Nation by Kristin Kobes Du Mez

Kristine Kobes du Mez is a professor of History at Calvin University. Her book was published by Liverright in 2021.

There are four copies of Jesus and John Wayne in the Greater Victoria Public Library system.

The author begins and ends her book with reference to the strange era of Donald Trump. In between, she gives a thorough history and explanation of the white evangelical movement in the United States which contributed greatly to Trump’s successes.

Kobes Du Mez clearly argues that this brand of extreme right wing evangelism is not derived from religious theology. Rather it is a cultural and political phenomenon that blurs the lines between denominations. She lists historical events that seemed to threaten the evangelical ideal of white masculine power: the end of World War II, the move away from blue collar jobs that relied on physical strength, the move toward urban office jobs with employee status, the end of the Cold War, the scandals of the Viet Nam war that blemished the reputation of the US armed forces, the rise of feminism, the gay and civil rights movements. The evangelical response was a scramble to protect white male power. The evangelicals embraced “family values” based on authoritarian patriarchy in the home, clearly defined gender roles (the male dominant but protective, and the female submissive), sexual purity (at least for unmarried women) and home schooling or private schooling. Public education was seen as undermining the authority of the patriarch. On a wider front they espoused militant nationalism at home and abroad. They supported a Christian national identity. And they glorified Jesus as a Warrior not a gentle pacifist.

Yet Kobes Du Mez also details the many ways in which evangelicals have compromised their stated ideals. Many are theologically illiterate. Biblical passages have been used freely to justify all sorts of otherwise embarrassing facts about the leadership and the movement’s actions. The evangelicals became masters at justifying their often contradictory stands on many issues.

Ultimately the author makes the case that this extremist movement is based on fear of loss of white male power and the resultant anger. These emotions lead evangelicals to seek enemies on which to focus. Over time the enemies have been communism, secular humanism, feminism, multi-lateralism, Islamic terrorism, gay rights, civil rights. These have offered convenient enemies and a sense of embattlement that draws people to right wing evangelism.

John Wayne has long been touted as the masculine ideal by evangelicals. His failings as far as sexual purity and religious faith are glossed over. Mel Gibson is also idolized for his movie roles as William Wallace and as Christ. Pat Boone contributed to the appeal of the movement. The author gives comprehensive detail about the marketing aspects of the movement and the wide cultural and financial ramifications. Books, movies, clothing have made millions for their promoters. Donald Trump is the new rugged, raucous hero of the movement. His sexual misdeeds and breaking of laws are excused as necessities in an America which has declined morally. His misdeeds are part of his passion, courage, and leadership in evangelical eyes. The internet and television contribute hugely to the spread of evangelical ideas.

However, Kobes Du Mez does not address the future or how this toxic movement can be controlled or reduced. One can only hope there will be a future book on that subject.

Sara Chu is a regular contributor to LJR. She is a member of St. John the Divine's Social Justice and Action Group. Sara's latest cartoon also appears in Issue 16 on page 10.