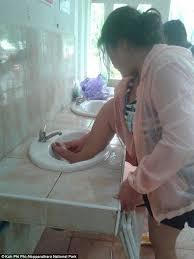 My grandmother puts her feet in the sink
of the bathroom at Sears
to wash them in the ritual washing for prayer,
wudu,
because she has to pray in the store or miss
the mandatory prayer time for Muslims
She does it with great poise, balancing
herself with one plump matronly arm
against the automated hot-air hand dryer,
after having removed her support knee-highs
and laid them aside, folded in thirds,
and given me her purse and her packages to hold
so she can accomplish this august ritual
and get back to the ritual of shopping for housewares

Respectable Sears matrons shake their heads and frown
as they notice what my grandmother is doing,
an affront to American porcelain,
a contamination of American Standards
by something foreign and unhygienic
requiring civic action and possible use of disinfectant spray
They fluster about and flutter their hands and I can see
a clash of civilizations brewing in the Sears bathroom

My grandmother, though she speaks no English,
catches their meaning and her look in the mirror says,
I have washed my feet over Iznik tile in Istanbul
with water from the world's ancient irrigation systems
I have washed my feet in the bathhouses of Damascus
over painted bowls imported from China
among the best families of Aleppo
And if you Americans knew anything
about civilization and cleanliness,
you'd make wider washbins, anyway
My grandmother knows one culture—the right one,

as do these matrons of the Middle West. For them,
my grandmother might as well have been squatting
in the mud over a rusty tin in vaguely tropical squalor,
Mexican or Middle Eastern, it doesn't matter which,
when she lifts her well-groomed foot and puts it over the edge.
"You can't do that," one of the women protests,
turning to me, "Tell her she can't do that."
"We wash our feet five times a day,"
my grandmother declares hotly in Arabic.
"My feet are cleaner than their sink.
Worried about their sink, are they? I
should worry about my feet!"
My grandmother nudges me, "Go on, tell them."

Standing between the door and the mirror, I can see
at multiple angles, my grandmother and the other shoppers,
all of them decent and goodhearted women, diligent
in cleanliness, grooming, and decorum
Even now my grandmother, not to be rushed,
is delicately drying her pumps with tissues from her purse
For my grandmother always wears well-turned pumps
that match her purse, I think in case someone
from one of the best families of Aleppo
should run into her—here, in front of the Kenmore display

I smile at the midwestern women
as if my grandmother has just said something lovely about them
and shrug at my grandmother as if they
had just apologized through me
No one is fooled, but I

hold the door open for everyone
and we all emerge on the sales floor
and lose ourselves in the great common ground
of housewares on markdown.
Mohja Kahf
Ministries
Faith in Formation