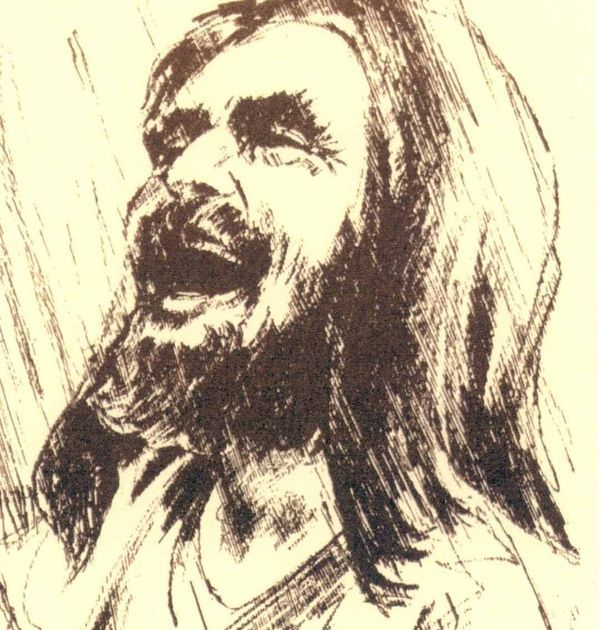 In the ancient stories of our faith a child is promised to elderly matriarch Sarah, and her partner Abraham - and she, being of advancing years, laughs at such a prospect, following a long life without child-bearing.  Sure enough, three chapters later (The story is spread between the book of Genesis chapters 18 and 21) she gives birth to a child she names Isaac (from the Hebrew word for Laughter, Yitzchak).  So laughter is foundational to Christianity and to our ancestors in faith, the Jewish People. Certainly Jesus seemed to know how to laugh, and was happy to use outrageous images and exaggerations to make points in his stories and comments; the picture of the laughing Jesus which is titled "Jesus Christ, Liberator" has been popular for over forty years and is one which reminds us of the fullness of Jesus' humanity in contrast to the intense, unsmiling, melodramatic Jesus of many artistic, theatrical and cinematic interpretations. (For more details follow this link)

Laughter is good for us - there is a common agreement amongst health practitioners that laughter is good for our mental and physical well being; creating a sense of connection and community, reducing stress hormone levels, improving cardiac health, releasing endorphins, lowering blood pressure and more. Laughter is important in our faith too! To quote Laughter University Online (it's a thing!) "In the words of American theologian Reinhold Niebuhr “Humor is a prelude to faith and laughter is the beginning of prayer.” St. Thomas Aquinas himself said “It is requisite for the relaxation of the mind that we make use, from time to time, of playful deeds and jokes.“ (Article here)

Laughter is also something that can be a force for change - when we learn to laugh at ourselves and the oddness of the world, refusing to despair at life's vagaries but celebrating the good, we can be transformed and transform our world. It can help us in engaging with that which we might feel uncomfortable, threatened, or oppressed by and allow us to explore the difficult parts of life.

“Laughter, then, shows us the boundaries that language is too shy to make explicit. In this way, humor can be extremely useful for exploring the boundaries of the social world. The sparks of laughter illuminate what is otherwise murky and hard to pin down with precision: the threshold between safety and danger, between what’s appropriate and what’s transgressive, between who does and doesn’t deserve our empathy. In fact, what laughter illustrates is precisely the fact that our norms and other social boundaries aren’t etched in stone with black-and-white precision, but ebb and shift through shades of gray, depending on context.”  (Kevin Simler and Robert Hanson The Elephant in the Brain.)

The Lord dealt with Sarah as he had said, and the Lord did for Sarah as he had promised. Sarah conceived and bore Abraham a son in his old age, at the time of which God had spoken to him. Abraham gave the name Isaac to his son whom Sarah bore him. And Abraham circumcised his son Isaac when he was eight days old, as God had commanded him. Abraham was a hundred years old when his son Isaac was born to him. Now Sarah said, ‘God has brought laughter for me; everyone who hears will laugh with me.’ And she said, ‘Who would ever have said to Abraham that Sarah would nurse children? Yet I have borne him a son in his old age.’

Almost half way there!