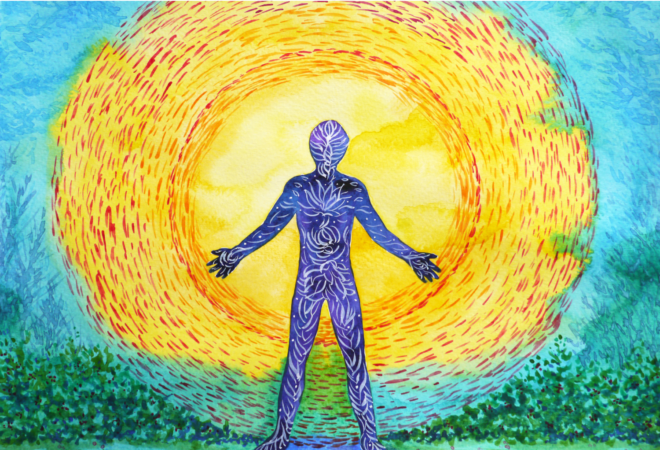 An unhealthy dichomoty has been set up in Western Culture - commonly called 'The First World' - which has its philosopical roots in 'The Age of Englightenment' and the Christian tradition as it developed in Europe.  We have separated our minds/souls/hearts and our bodies.  We have forgotten what it means to be 'embodied'.

This is summed up in the way in which Christians talk about 'Spirit and Flesh' as being in opposition to one another - it echoes ancient world views of the Spirit being somehow pure, and flesh defiled and corruptable.

The message of Christian faith, and of the Hebrew Tradition in which our roots grow deep, could not be further from such a view. At the beginning of our shared Holy Scriptures, the Hebrew Bible, we read in the myth of Creation "And God looked at all God had made, and it was very good." The earthy, grounded reality of our lives is hallowed by God - to the point that, as the Christian story tells it, God entered into this reality as an actual physical, entirely human, being.

So we should take note, take care, and pay attention to our bodies. To what it means to be embodied.

Dr Sabina Singh, Political Scientist, Writer, Activist, Teacher, Dancer, and Dance Instructor talks of us being disconnected from our bodies and needing to be aware of how our mental and emotional states are felt in our bodies. Drawing on this she teaches young people to address and understand both how connecting with the physicality of those feelings and addressing them in movement can help us transform ourselves and our ways of relating to the world. This is particularly addressed in her workshop formulated with Dr Rita Dhamoon 'Exploring Diversity and Power Through Movement."

As we consider the importance of our embodied self, and await the celebration of the Incarnate Word, the Divine embodied. How can we be more aware of our physical self and its links with our emotional, thinking, and spiritual self?

He was in the world, and the world came into being through him; yet the world did not know him. He came to what was his own, and his own people did not accept him. But to all who received him, who believed in his name, he gave power to become children of God, who were born, not of blood or of the will of the flesh or of the will of man, but of God.

And the Word became flesh and lived among us, and we have seen his glory, the glory as of a father’s only son, full of grace and truth.