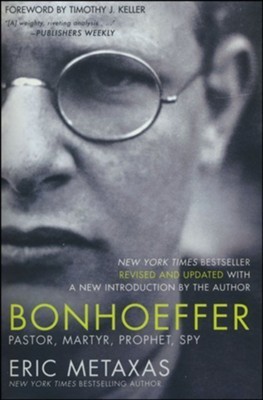 The word “Spy” in the title intrigued me.  I knew something of Bonhoeffer's integrity in the face of Nazism, but “Spy”?  I also grew up in the same area of London during the war where I discovered Bonhoeffer actually was a Lutheran Pastor prior to the war.

The word “Spy” became clearer in the later stages of the book, when Bonhoeffer returned from England and America and realized his faith called him to stand fast against the evils of Nazism.  He even joined the plot to assassinate Hitler in 1944.

He was aided, of course, by his international colleagues, but declined to stay in safety in America.  As war started, he thought of chaplaincy or hospital service, as he would never fight for the Nazi’s after his battles with them and their racism.

He lost over half the young seminarians he had taught during the war, but was always supportive of them, even though he disagreed with their decisions to fight.

The last couple of hundred pages of the book (of the total 542, excluding notes) detail his engagement to Maria and long imprisonment in Berlin in 1943, following the first failed plot to kill Hitler, and his transfer to Buchenwald, and finally, Flossenburg, his place of Martyrdom in April 1945, just before the Allies liberated the camp.

Late in 1945, a Memorial Service for Bonhoeffer organized by Bishop Bell was held in Holy Trinity, off Brompton Road in London. This was incomprehensible to some, and even disturbing to others who had suffered losses in the War. That it was held on British soil, and broadcast on the BBC and into Germany, was a shock to many, not least to an elderly couple in Berlin – who knew nothing of his death.

When the service ended, Karl and Paula Bonhoeffer turned off the radio.

David Buckman is the Treasurer at St. John's. Originally from England, David moved to Canada in 1969, and he has lived in B.C. since 2003. David's wide range of interests include -- business, music (singing with Victoria Arion MC) and sports (lawn bowling and squash).