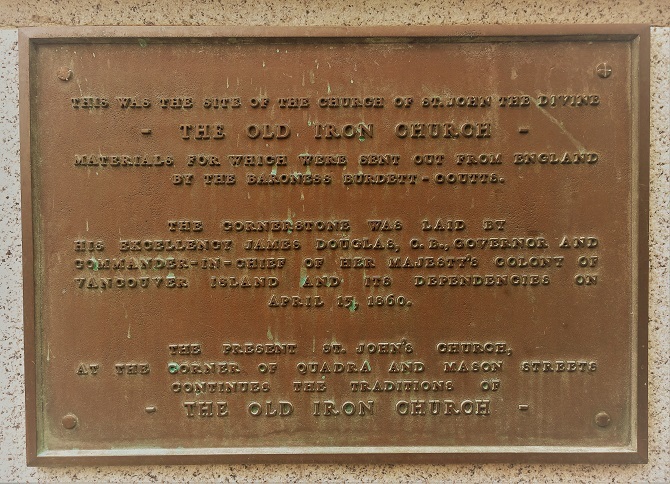 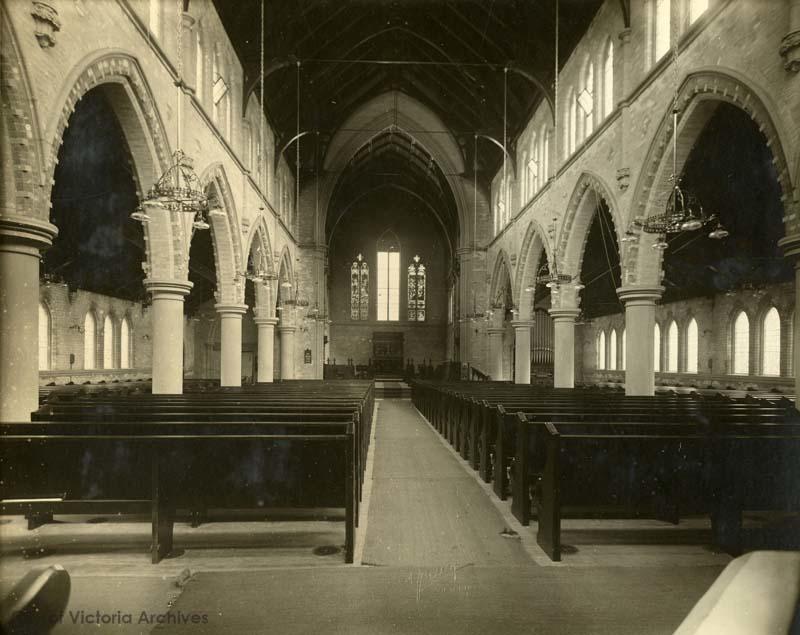 The congregation of St. John the Divine was founded in Victoria in 1860. The original building was the gift of Lady Angela Burdett couts (heiress to the Coutts private bank fortune and a devout Church of England benefactor, who also endowed the Diocese). She seemed to have little confidence that Victoria could build a church so she had a corrugated iron building shipped in pieces around the Horn to the new colony, along with a prefabricated rectory, a Bishop and two workmen. This building, located at Douglas and Fisgard where the Hudson Market is now, was known unofficially as “the Iron Church”. It was the first consecrated Anglican church in British Columbia.

The Iron Church presided over the corner of Fisgard and Douglas Streets until the Hudson's Bay Company made the parish an offer for the land which couldn't be refused. So parishioners commissioned a new church to be built at Mason and Quadra Streets and it opened on Dec. 22, 1912. This building was built of brick and stone in a modified gothic style, with a mock-Tudor rectory built at the same time; the copper-clad spire, one of the city's landmarks, was added a bit later, and a Parish Hall, now Pacific Opera's Baumann Centre, added in 1954.

In 1960 a fire, blamed on an electrical fault, gutted the building. Little was saved, but the rector, who then lived next door, managed a 4 a.m. rescue of altar hangings that had come from Westminster Abbey - one set had been used for the 1937 Coronation of King George VI and the other for the 1953 coronation of Queen Elizabeth II. The bell and stone baptismal font, which had been brought from the “Iron Church,” also survived the fire and are used to this day.

The church was rebuilt after the fire, reopening in 1964. In the reconstruction the Emmaus Chapel was formed at the east end of the south aisle. The stained glass was gradually replaced with scenes from the life of Christ in the sanctuary and Chapel windows, the twelve Apostles in the south aisle and in the north aisle a more innovative series showing the products and occupations of B.C. Some years later a lobby and office were built to connect the church with the old rectory, now used for offices and meeting rooms. In 1979, a seniors' residence, St John's Court, was built next to the Church Hall.

The original Bishop of the Diocese, George Hills, named the new which came with him on the ship around the Horn after his former parish in Yarmouth, England. The early rectors all returned to England within a few years but the arrival of Mr Jenns in 1868 signalled the beginning of a series of long incumbencies, so that the present rector, the Venerable Alastair McCollum is only the ninth in line.

In the 150-year history of the Parish the downtown has gradually ceased to be a residential area, and though in the last few years this trend has been to some extent reversed, most of the congregation now comes from other parts of the city. Over the years its mission has changed so that much of its work today concentrates on the challenges of meeting the needs of the inner city. This emphasis on social justice was nurtured by The Ven. Robert MacRae, who arrived in 1977, fresh from leading a boycott of Nestle products, because of that company’s promotion of baby formula in developing countries. The tradition continued under the stewardship of The Rev. Harold Munn (1998-2011), who was deeply involved and outspoken on issues of homelessness, and under the interim leadership of the Rev. Larry Scyner following the Rev. Munn's retirement. St. John the Divine has also broken ground in its welcome to people who are gay or transgendered, and was the first Anglican church in the Diocese to bless a marriage between two gay parishioners. At the time Scyner said: “It was the culmination of many years of hard work by the congregation, and it was a joy to have had even a small part in this.”

2013 saw the induction service of our current rector, the Rev. Alastair McCollum, who like the original Iron Church, was imported from Britain. For the rectors past and present see this page.

The book The Iron Church by Stuart Underhill is available for purchase at the office. An extract can be found here.