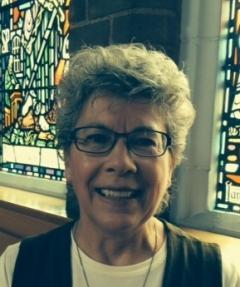 Jane was born and raised in Ottawa Ontario, later moving to Nova Scotia, adding to her psychology degree a Master’s in Counselling from Acadia University, NS. She came to BC in 1991 for a planned six months with her family. It stretched to seven years on Salt Spring Island. It was a time of spiritual growth and formation. Returning to NS in 1998, Jane attended the Atlantic School of Theology and was eventually ordained to the priesthood.

Her first parish was a new, half-constructed, suburban church outside Halifax. During her ministry, together they built the church and the congregation. Next Jane moved to Nova Scotia’s beautiful South Shore to serve two joined, rural parishes which included three churches. She lived in a big old rectory right on the LaHave (a tidal river). Every time a sou’wester blew the high tide in, it began to fill the dirt floor basement. She is grateful that her prayers that the frequent power outages wouldn’t happen just THEN were always answered.

After four years, all career and retirement plans were joyfully tossed out by the surprise arrival of wee great-niece Heidi on Salt Spring Island, so Jane said “Goodbye” to NS and relocated to Victoria in late 2013.  She discovered SJD, loving the Thursday Contemplative Eucharist, and later joining Sunday worship where she found a warm welcome.  Jane was licensed by Bishop Logan, and is delighted to be an active participant in the SJD Family.

As of April 10, 2016 Jane gave up her salary to become a volunteer associate priest.